UNIVERSITIES TO CLOSE DOWN IN HONOUR OF QUEEN ELIZABETH 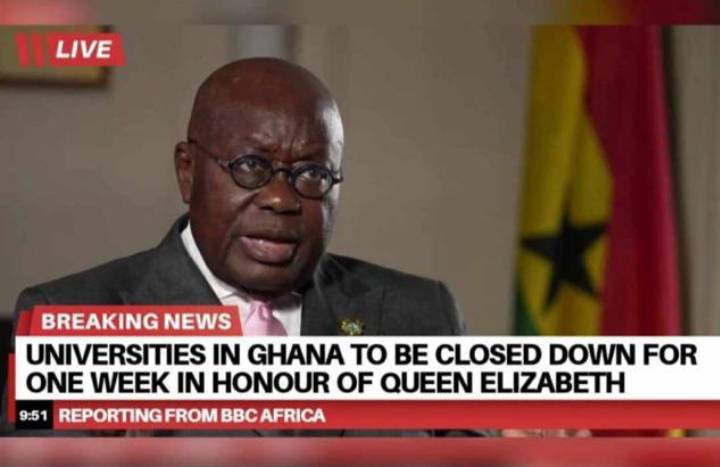 President Nana Addo Dankwa Akufo-Addo has directed that all officials flag in the nation should fly half-mast for seven days from tomorrow Friday, September 9, in honour of the late Queen Elizabeth II, the longest serving monarch in British history.

The directive was issued in a condolence message to the new British monarch, King Charles III, the Royal Family, the Prime Minister, and the Government and people of Great on the passing of the Queen, Thursday,

Queen Elizabeth II, 96, died Thursday after a brief period of medical supervision at her residence, the Balmoral Castle, Aberdeenshire, Scotland.

The monarch, who was Queen of the United Kingdom of Great Britain and Northern Ireland and Head of the Commonwealth of Nations, was taken ill earlier on Thursday. She reigned for 70 years.

She was succeeded by her heir, Prince Charles, now King Charles III.

“The Ghanaian people have very fond memories of the two visits she made to Ghana during her reign, and, on both occasions, we remember the friendliness, elegance, style and sheer joy she brought to the performance of her duties,” President Akufo-Addo wrote.

Eulogizing the late monarch, the President said: “As Head of the Commonwealth of Nations, she superintended over the dramatic transformation of the Union, and steered it to pay greater attention to our shared values and better governance. She was the rock that kept the organisation sturdy and true to its positive beliefs.

“We shall miss her inspiring presence, her calm, her steadiness, and her great love and belief in the higher purpose of the Commonwealth of Nations, and in its capacity to be a force for good in our world.

“She was a cherished and revered monarch of the British people, the longest serving in their history, who will be sorely missed. We are saddened by her departure.

“May God bless her soul and give her peaceful rest in His Bosom until the Last Day of the Resurrection when we shall all meet again,” he said.