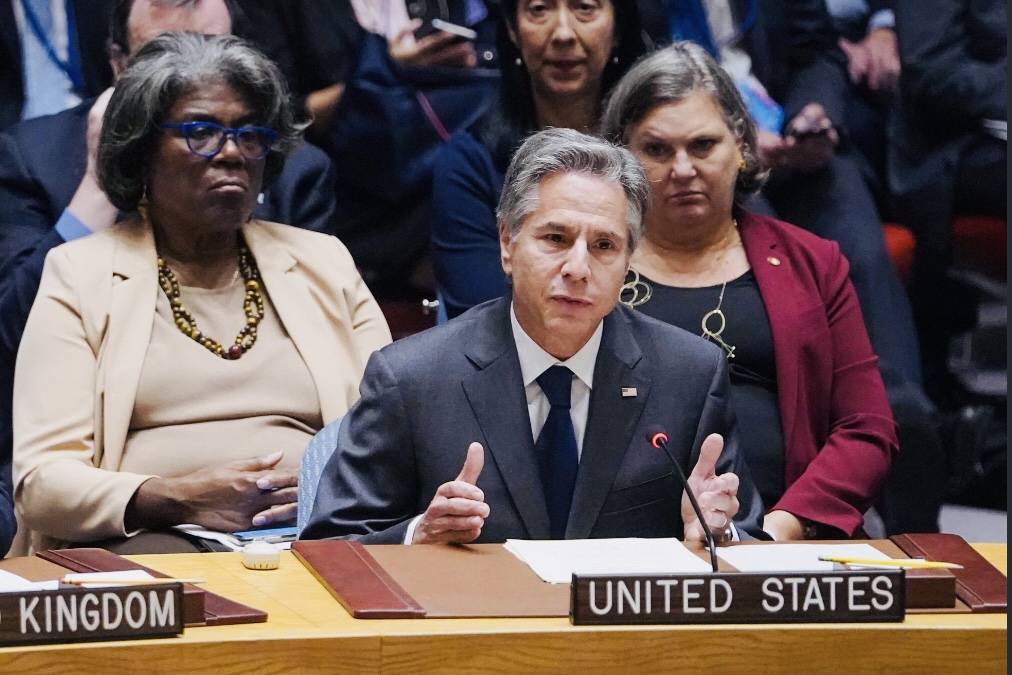 At a high-profile U.N. Security Council meeting on Thursday, the top diplomats of all three countries spoke, but did not quite meet. The United States urged other countries to encourage Russia to cease making nuclear threats and to end "the tragedy" of its war in Ukraine.

The session, which was held in conjunction with the yearly U.N. General Assembly meeting of world leaders, was prompted by a noteworthy development in the war this week: Russia called up a portion of its reserves for the first time since World War II. President Vladimir Putin said that if his nation's territory is threatened, it will "use all tools at our disposal" to protect itself.

Putin's remark struck U.S. Secretary of State Antony Blinken as particularly ominous in light of the upcoming referendums on Russian integration in Russian-controlled regions of eastern and southern Ukraine.

These votes have been denounced as invalid and non-binding by Western governments. Blinken cautioned that should the Ukrainians seek to reclaim certain territories, Moscow might interpret the action as an attack on "Russian territory."

Every council member ought to make it crystal clear that these careless nuclear threats must end right away, he said.

During his own remarks at the council meeting, Russian Foreign Minister Sergey Lavrov avoided mentioning either his nation's nuclear capability or the recent troop mobilization. France had called the meeting to discuss holding those responsible for alleged abuses and atrocities committed during the nearly seven-month-long war accountable.

Instead, Lavrov reiterated his nation's frequently made assertions that Kyiv has long persecuted Russian speakers in eastern Ukraine, one of Moscow's justifications for the invasion, and that Western support for Ukraine is a danger to Russia.

He maintained that their objective is to prolong the conflict "to wear out and undermine Russia," calling the stance of governments that are arming and training Ukraine's forces "especially cynical."

According to such doctrine, the West would be actively involved in the fight, according to Lavrov. He continued by saying that his nation will not accept Ukraine as "an anti-Russian staging ground to create threats against Russian security."

Since the start of the conflict in Ukraine in February, the Security Council has held hundreds of tense discussions, but Thursday's meeting was particularly significant.

Blinken addressed the foreign ministers seated around the council's renowned horseshoe-shaped table, saying, "That President Putin picked this week, as most of the world gathers at the United Nations, to add fuel to the fire he started shows his utter contempt and disdain for the U.N. Charter, the U.N. General Assembly, and this council."

Nobody anticipates the council taking action against Russia, though, given Moscow has a veto as a permanent member.

But even so, it was unusual for top diplomats from Russia and Ukraine to be in the same room at the same time. This is made even more remarkable by the fact that Lavrov is subject to U.S. sanctions.

Ukrainian Foreign Minister Dmytro Kuleba reportedly objected as council officials were getting ready to place a banner designating Ukraine's seat next to Russia's, indicating the tense atmosphere. Later, the sign was relocated to a different location.

Kuleba jokingly informed reporters in advance of the meeting that he intended to maintain a "social distance" from Lavrov. The truth is that he didn't have to: Russian ambassadors fled almost as swiftly as Russian military, Kuleba quipped later in his own address after the Russian spoke briefly before leaving immediately after.

Lavrov, according to the British Foreign Secretary James Cleverly, didn't seem interested in hearing "the collective censure of this council."